Should the UK leave the EU and its membership behind

Recent press coverage as to whether the UK should leave the EU, reform membership or stay as we are, has created some mixed opinion from individuals, to SME’s through to multi-national corporations.

In this latest edition of the Big Sky Additions blog we will look at how the upcoming referendum will affect us.

The prime minister has embarked on a campaign to renegotiate the UK’s relationship with the EU ahead of the referendum planned for 2017 and has outlined key areas where he is seeking reform. He has vowed to campaign with his “heart and soul” to keep Britain inside a reformed EU if an agreement on these reforms is reached.

However, a reluctance from within the EU for such changes – particularly those which require treaty change – could hamper Cameron’s plans to improve things for the UK.

So what are the advantages and disadvantages of being a part of Europe? Would Britain be better off staying as a member, leaving completely and going it alone, or renegotiating membership leaning towards more control and flexibility in the UK’s favour?

There are many different sources and opinions on what actually are the Advantages and Disadvantages or Pros and Cons of EU membership; below are some of the commonly occurring items:

Access to health benefits.
EU citizens are provided with the EU Health Insurance Card that gives them access to emergency healthcare whenever they need it, while visiting any Member States. What is even better is that whatever rules that applies to locals will also apply to the visiting citizen, effectively providing peace of mind.

Freedom of movement.
Citizens of all member states are free to move from one member country to another. They can travel, study, work or live in any EU state of their choice. If they choose to move within the Schengen Area, which comprises 26 European countries, they can do away with using a passport, visa or other travel requirements. This is because the Schengen Area is considered a single country for international travel purposes and only uses a common visa policy.

Better jobs and workers’ protection.
British citizens, for example, have the option to work locally or at any of the EU countries, which means more job opportunities to choose from. This is especially true that global manufacturers are moving their businesses to EU countries because of lower operating cost. So imagine what would happen if Britain breaks off from EU, effectively cutting off their access to Member States and employment offers.

Lower prices of goods and services.
Operating as a “single market”, there is a need to find an average price for all products sold and exchanged within member countries. This resulted in lower prices that are further reduced with the absence of custom tax. Usually, goods transported or sold between states and countries are charged with custom tax, but because the EU has an integrated economy, no such charges apply.

Development of underdeveloped member regions.
Some states of the EU are economically deprived. In a bid to narrow the disparities between developed and underdeveloped regions in Member States, the EU has developed structural funds that come in two types. One is the European Regional Development Fund designed to create infrastructure and support investment in job production, and the European Social Fund that invests in training measures to help unemployed and disadvantaged members of the population to enjoy a working life.

High cost of membership.
Becoming a member of the EU does not come cheap. It is said that the cost per head vary between £300 and £873, which explains why the UK government spending reached a net worth of £6.883 billion, excluding regulation cost.

Problems with the policies.
Operating as a single market and following common policies resulted in many discrepancies. Regulations that were designed to protect smaller member countries can affect larger countries, since the European Commission looks after the interests of the entire EU and not the individual country. Wealthier countries are also obliged to share their wealth with other member States, a good example of which is Germany bailing out Greece.

Problems with the Single Currency.
Although EU doesn’t require all its members to convert to Euro, they placed emphasis on it and insist on the use of the Single Currency. Unfortunately, the Euro is causing problems all across the EU, including high unemployment rates, slow economic growth, and unsuitable interest rates in the Eurozone area.

Overcrowding due to immigration.
With citizens of Member States being able to relocate freely, there is loss of immigration control that resulted in overcrowding. Over the next decade, population in the UK is said to rise at an estimated 70 million because EU rules prohibit them from restricting free movement.

Data sourced from the Greengarageblog.org

The European Union might be good for some of its members, but bad for others. Unfortunately, an EU exit also comes with pros and cons, which calls for strategic planning, regardless of which direction to take — better off out or in.
Some of the key points which have caused the most discussions are Trade, Jobs, Regulations and Influence with many media’s reporting a host of different views and opinions. We will focus on two key elements, Trade and Jobs in this blog.

One of the greatest advantages of being an EU member is the access to a free trade market between other nations also holding membership. Although this doesn’t benefit all UK businesses, as a whole, Britain imports more than it exports. The costs of EU membership to the UK is £15bn gross (0.06% of GDP) – or £6.883 billion net. UKIP claim that the cost of EU membership in total amounts to £83bn gross if you include all possible costs, such as an ‘estimated’ £48bn of regulation costs – or £1,380 per, however many leading businesses feel the savings in import/export costs to them vastly outweigh membership costs.

An extract from ‘theweek.co.uk’ explained: “A study by the think-tank Open Europe, who wants to see the EU radically reformed, found that the worst-case “Brexit” scenario is that the UK economy loses 2.2 per cent of its total GDP by 2030. However, it says that GDP could rise by 1.6 per cent if the UK could negotiate a free trade deal with Europe and pursued “very ambitious deregulation”.”

The current open-movement for EU workers across member nations has allowed many qualified, experienced and dedicated professionals to move freely and expand their horizons. This has in turn provided UK businesses with an influx of uber-keen employees, leaders and business owners who have supported the boost in the UK economy. Open-movement has also enabled those less qualified and experienced to gain fantastic new experiences and career paths away from their home country.

This however, as we know, has also led to an influx of those not contributing to the economy and making the most of the open benefits system throughout the UK. This particular subject causes a great deal of controversy with strong opinions from either side on how to better control this.

The Guardian reports “On migration, the prime minister cited the Conservative manifesto commitment to ban EU migrants from claiming in-work benefits and child benefits for four years. But he indicated that he was open to negotiation in this area, amid strong opposition from eastern European countries such as Poland.”

What the polls say?

Latest available statistics from ‘YouGov.com’, which have been gathered since 2012 give us some interesting results on ‘Leave’ or ‘Stay’: 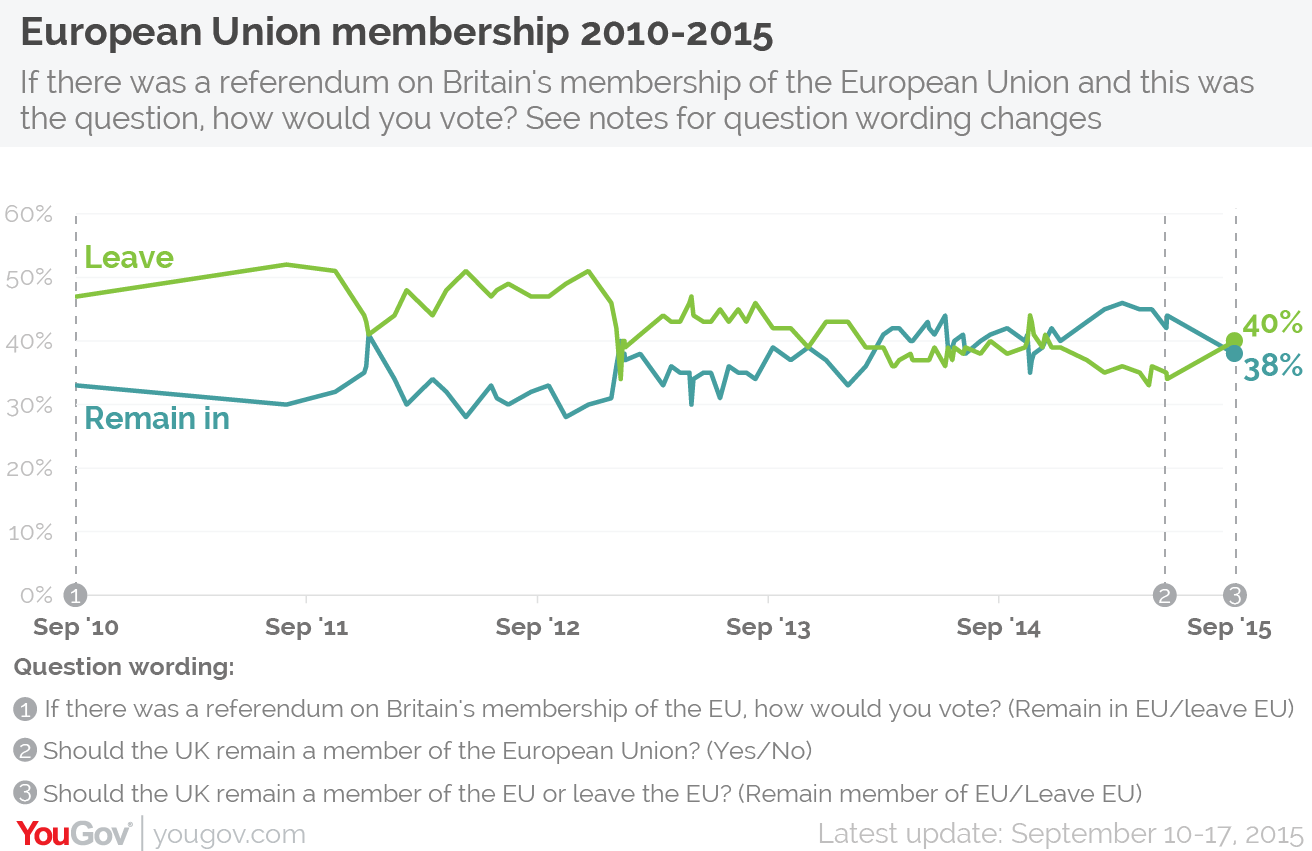 The Referendum – What to expect?

When will the EU referendum he held?

The final date is not yet known, although Cameron has committed to holding a referendum before the end of 2017. Some have suggested that the pace with which negotiations have begun suggests the vote could be called this year in order to avoid a long period of uncertainty that might hurt businesses.

Who can vote in the referendum?

Eligibility will be based on the criteria for voting in a general election, which means citizens of most EU countries (who can vote in local and European elections in Britain) will not be allowed to take part. Anyone over the age of 18 who falls into one of the following groups can cast a vote:

Where do you stand on the referendum?

At Big Sky Additions we are keen to hear your views and thoughts on what the Prime Minister should be focusing on; should we stay, leave, renegotiate or perhaps another angle not covered above?

Get in touch with us today by emailing Dan Chater with your thoughts by 31st January 2016; once responses are collated, the results will be published confidentially in our next blog, due out in February 2016:-